Opinion: The Gaza Strip Is A Lot Like Silicon Valley 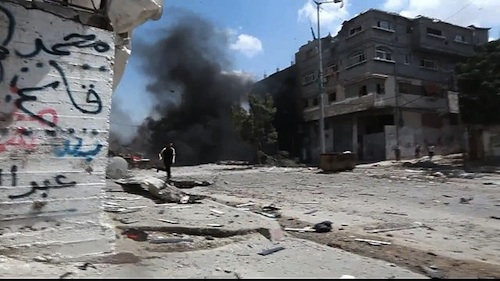 moigovps/Wikimedia Commons
As I watch footage of the destruction in Gaza and listen to the gut-wrenching stories of innocent people caught in the crossfire, one thought comes to mind: this is a lot like Silicon Valley.

Like Palestinians, we techies face hardships every day. We are denied access to places simply because of our face computers. We are heckled by anti-gentrification protesters on our way to work. We are attacked by hateful graffiti scrawled by our fellow citizens who despise us.

On top of that, the mainstream media refuses to cover our plight sympathetically. Instead, like children on a beach running from Spike-LR missiles, we are forced to dodge hit pieces from professional bullies seeking to destroy our livelihood.

Every nation that currently exists, treats us like garbage. Everywhere I look, I see the reputations of my colleagues blown apart like civilians in a UN school. Sean Parker can't get married without environmentalists getting their panties in a twist. Kevin Rose can't tear down a crappy old historic house without incurring the wrath of angry mobs. Presenters at Google I/O couldn't get through a keynote without some activist yelling about drones.

We desperately need an exit from this awful society. And yet, like Palestinians, our efforts to create our own state are dismissed as a joke. Well, it's time we took things into our own hands. We need to build some sort of "iron bubble" to insulate Silicon Valley from America's uncontrolled nosedive decline. Then, one day, when America is at its weakest point, we can aquhire them and disrupt the social order, with techies at the top. The bottom 1/3rd of the population will become live-in servants for the top 1/3rd.

Until that day, however, our struggle will continue.