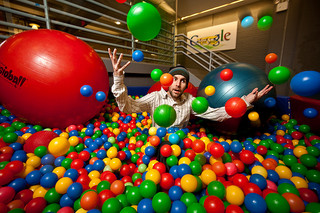 Flickr
For weeks the tech world has been aflutter with speculation about what's inside Google's mystery barges. Now, we may finally have an answer: giant ball pits.

A member of Google's architectural team tells Tech News Rumor Insider that the search giant is planning to launch a series of playplaces for young children filled with slides, indoor mazes, and yes, giant ball pits, akin to those seen at Chuck E. Cheese's and Discovery Zone. Costumed versions of beloved Google mascots such as Pegman and the Android robot will roam the halls, ready to dish out hugs and photo opportunities.

"Well, we have a lot of experience building ball pits and slides for manchildren," the insider tells us. "One day we just decided, why not build for actual children?"

Allegedly, CEO Larry Page needed a lot of convincing that this would be a profitable venture. However, once he saw the architectural team's concept art for a themed area dubbed The LEGO Zone, "his eyes just lit up like a kid on Christmas."