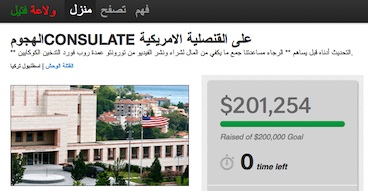 Fuselighter
After US forces assassinated al-Qaeda Osama bin Laden in 2011, his financial assets were frozen and the money was traced, dealing a major blow to the organizations's ability to fund new projects.

Launched late last year, Fuselighter is essentially a version of Kickstarter that allows anyone the ability to garner financing for terrorism through the miracle of crowdfunding. Backers can donate any amount of money, whether it be 5 cents or 5 million. There are also reward tiers for backers who pledge a certain amount - a shoutout in a manifesto, perhaps, or their name written in blood.

"I watched a TED Talk about crowdfunding and micropayments and all that, and I knew this could be applied to terrorism," said Fuselighter's founder, Mokhar al-Zargerburq, who at 20 is already a member of Pakistan's tech elite. "Before we came along, the money would come from a couple big backers, you know, sometimes a state. What Fuselighter does is disrupt the whole model and re-paradigm it for the 21st century. It makes terrorism accessible to anyone."

What's the secret? al-Zargerburq stressed the importance of the site's privacy and encryption features. "Couple bucks here, a few bucks there, no one will evey suspect a thing. It spreads the money around and makes it harder for the anti-disuption crowd to shut things down."

Although Fuselighter has seen a few successes, al-Zargerburq is hoping the site could fund something on a larger scale. "The potential is certainly there. We followed the Zack Braff thing on Kickstarter with keen interest. Two million dollars in less than a week. Just imagine how much terrorism that could buy."