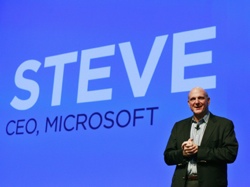 Steve Ballmer has invested in Tech News Rumor Insider, according to a company-wide memo that was just forwarded around the office.

Anywho, just wanted to let you guys know that I had a lovely chat with Steve Ballmer the other week up in Sea-town (that's Seattle for you no-knows). The B-man has generously agreed to make a significant $5 million investment in Insider and other properties in the JSACP network. Booyah!

Obvs we're super-pumped about this. We can finally afford that mahogany beer pong table for the office I've been pullin for. And, uh, journalism or whatever the fuck it is you nerds do on your little computers, lol just kidding.

Our editors have asked us to assure readers this development will have no absolutely no effect on our coverage of Microsoft's products, including the beautifully designed Nokia Lumia 920 Windows Phone with PureView camera technology and PureMotion HD+ display, the newly reinvented Office 2013, and the revolutionary new Surface Pro tablet that brings together the best of Microsoft in one awesome new device.