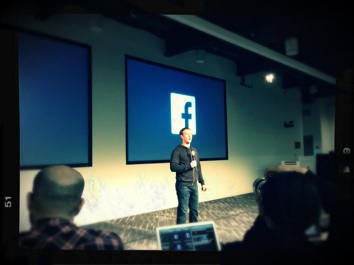 Taking the stage at the company's headquarters in Menlo Park, California, Zuckerberg boldy proclaimed the event "the most important announcement Facebook has ever made."

After playing a epic 12-minute film about the history of typography, Zuckerberg stressed the importance of fonts and how Facebook needs to reflect their ever-changing pace. With a slide of a 2007-era News Feed projected behind him, he declared the site's default font Lucida Grande "stale." Stressing the importance of nurturing the "fonts of tomorrow," Zuckerberg then announced a sweeping overhaul of the site's typography, with a suite of all-new fonts designed from the ground up. Facebook engineers and font designers were brought on stage to showcase the new Facebook-themed fonts, which will be rolling out to all users in the next week.

Following the announcement, Zuckerberg thanked the media for attending and proceeded to give each reporter a big hug. It was firm and gentle.