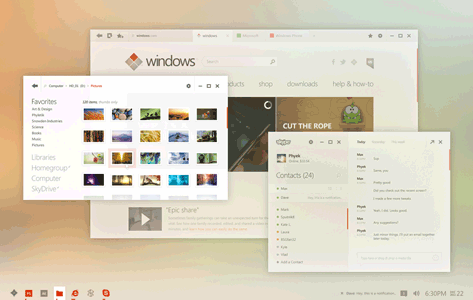 Users can breathe a sigh of relief: Windows 9 has finally done away with the schizophrenic "Desktop vs. Metro" mindset. There's just one "desktop" now, with a Metro-inspired heavy emphasis on design. And yes, the start button is back.

If the last version was bold and ostentatious, Windows 9 is humble and inviting. The new design language, Aetro, is digitally authentic but infused with a splash of nature. I feel at home when I'm using my Windows PC. The previous rainbow-inspired color scheme looked nice, if a bit childish and patronizing, but now it feels like the grown-ups are back in charge.

YES, THE START BUTTON IS BACK

Windows 9 is margarine smooth, and highly polished. It's still very much an internet-connected OS - users can still use their Microsoft Account to sync files to the cloud via SkyDrive, as well as their devices (and not just those running Microsoft software) - but it's less likely to give you an aneurysm from information overload. Notifications appear discretely in the taskbar. If you absolutely must know how your stocks are doing or what your Facebook friends are up to right now, there are new Metro-inspired desktop gadgets you can use, that will also open the corresponding Windows 9 app.

Speaking of apps, there's an overall sense of comfortable consistency to the built-in apps that I don't think I've ever seen in a Windows OS. Every app has been given a sleek makeover, including venerable standbys Paint and Notepad. Gone are the annoying advertisements embedded in every other app. The games are nice too. After years of waiting, SkiFree is finally back on Windows with a nice 3D version that really shows off the OS's processing power... I think Windows 9 might give Xbox a run for its money.

Oh, and once again you can have multiple windows open, not just one fullscreen app and one quarter-sized app docked to the side. That might've flown on tablets, but this is Windows, emphasis on the plural. Why Microsoft thought that would fly on PCs is beyond me.

If there's one thing I don't like about Windows 9, it's there simply isn't enough "wow." Fixing everything that was wrong with its predecessor is enough to make this the best version of Windows yet, but is it enough? There's nothing really "big" about this update... but maybe that's for the best.