Yahoo! CEO Revealed To Be Hobo 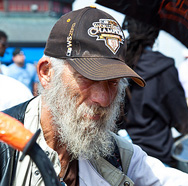 chekhter
Yahoo!'s top executive, Jim Newton, has been revealed to be a hobo. A Tech News Rumor Insider investigation discovered that Newton, also known as "Boxcar Joe," wandered into Yahoo!'s Sunnyvale headquarters six months ago with a resumé scrawled on a piece of cardboard, on which he claimed to have served stints at PayPal, Google, Real Media, and Dell. The Yahoo! board hired him on the spot. Several sources tell TNRI they became suspicious of Newton after seeing him carrying a bindle to meetings and ordering "vittles" at the Yahoo! cafeteria.
FILED UNDER: exclusive, Yahoo!